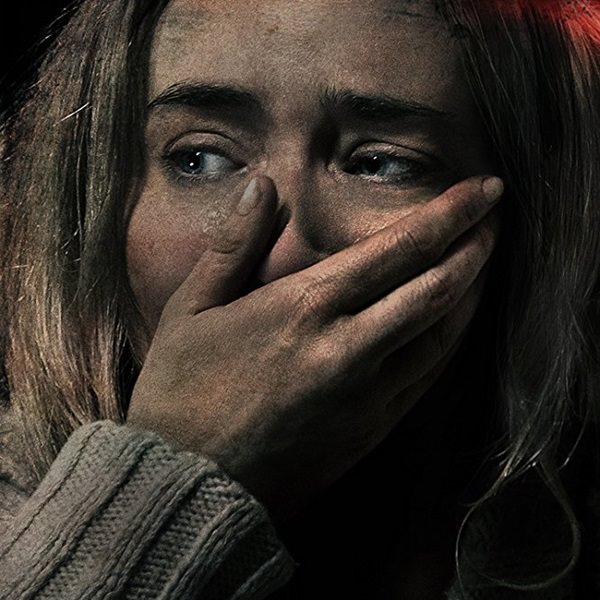 ‘In a world of monsters who hunt by sound a family hides in complete silence.’

Who would have thought the unassuming funny guy from the American version of The Office (2005-2013) would go on to direct and write one of the better creature features to come out in quite some time. Well, that’s exactly what John Krasinski has done with A Quiet Place, in which he also stars alongside wife Emily Blunt. Although not a directorial debut, with such a great horror film, this will clearly be the movie to cement him as a director to watch out for.

Set in a post-apocalyptic landscape, the world has been ravaged by strange and savage creatures that are blind but can hunt by super-sensitive hearing. A family struggles to survive by only communicating in sign language, and cleverly living a life of silence.

There’s the survivalist father (Krasinski) and his wife (Blunt), oldest daughter Regan (Millicent Simmonds) who’s also deaf, and their youngest son (Noah Jupe). This is a small, laser-focused story that is very self-contained, being more an intimate look at a family’s struggle to survive in a harsh environment. Krasinski is far more concerned with his small set of characters than world-building, and as a result, we have no idea what’s happened and what these creatures are.

Frankly, this makes A Quiet Place so much better, with the director feeling no need to explain every little detail and waste precious time trying to fit in unnecessary exposition. Instead, we get a tight coherent story that does its job of creating an entertaining experience, within a perfect ninety minute runtime. Eagle-eyed viewers might see some subtle clues of what’s happened, but at no point does it overshadow the main plot or feel forced, with Krasinski smartly keeping it vague.

Helping this film stand out most of all, is the lack of dialogue and the clever use of sound. What could have easily been just a hollow gimmick, is actually used really effectively and is an integral part of the narrative. These ferocious beasts hunt by hearing, and it’s really fascinating seeing how resourceful these people are at getting by with making no noise. It also ranks up the tension knowing that one false move could bring certain death down upon them. Really, it’s like watching a silent movie, where Krasinski does such a brilliant job of visual storytelling, that even if you didn’t have the subtitles, we could still easily follow what’s going on.

Framing the story in such a way, also aids in the horror department, with that slow and quiet tone being used to a squeamish effect. Indeed, there’s some terrifyingly filmed set pieces, and the fact that no one can make a sound, makes it that more tense. For example, never since Signs (2002), has a cornfield seemed so scary, and one scene in particular I’m sure, will have a lot of women relating on an extremely visceral level.

With the need to stay quiet, every moment these mysterious antagonists are on screen, hunting one of the family members, your hand will be tightly over your mouth right alongside them as they try to control themselves. Yes, some cheap jump tactics are used, but they are utilised very well, and feel earnt for the most part. Where in the middle of silence, you’ll hear a large thunderous sound that will send you flying out of your seat.

Regarding the monsters, these are well-designed and deadly predators that will have your hands gripped to the seat whenever they’re on screen. Adding to their scariness is the fact we know next to nothing about them. Are they aliens, genetic mutations, or something supernatural? We’re never told, but that’s to the movie’s credit, and it brings something extra unsettling to these superfast beings the way their origins are kept a mystery.

Again, they are the primary threat but not the focus, and unlike other creature features, time has been spent in fleshing out the human characters. Considering hardly anyone speaks, Krasinski makes sure we get a deep enough understanding of each family member so that we want them to survive. This is all achieved by some amazing performances, with not a single weak link in sight. You’ll absolutely feel for these people, as they each make gut-wrenching life and death situations, and clearly love one another in the process.

Blunt is excellent as the mother who wants to see her children thrive. She has to convey a lot of emotion while not uttering a word, and she’s able to display it all on her face. As the father, Krasinski is the pragmatic one, and more interested in survival, but he does get a few moments with his wife and kids that are heart-breaking. He likewise displays an authentic chemistry with Blunt, yet that can’t be too hard for the real-life couple. Even the young actors bring a rawness and believability to their characters, especially Simmonds’ daughter, who gets a nice ark and proves super resourceful, despite having no sense of hearing. Actually, as a whole family unit, they gel-together superbly, and it works for them to have no other human element in the movie, concentrating solely on their relationships.

‘A Quiet Place is a fantastically gruesome and entertaining monster movie. However, thanks to Krasinski’s solid directing and well-written characters, it’s also a deeper and emotionally satisfying one as well. Combined with an ambiguous yet hopeful ending, this is a film that will wow, shock and awe, having you excited to see what this up-and-coming film maker does next.’